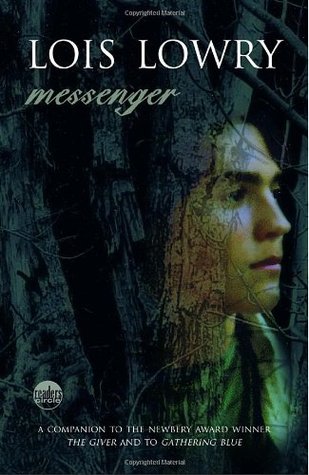 “Messenger” is the masterful third novel in the Giver Quartet, which began with the dystopian bestseller “The Giver, ” now a major motion picture.
Matty has lived in Village and flourished under the guidance of Seer, a blind man known for his special sight. Village once welcomed newcomers, but something sinister has seeped into Village and the people have voted to close it to outsiders. Matty has been invaluable as a messenger. Now he must risk everything to make one last journey through the treacherous forest with his only weapon, a power he unexpectedly discovers within himself.

A boy named Matty lives in a village of “broken people.” Some have disabilities, but some are just fine and are completely healthy. Matty lives with a blind man who we know to be Kira’s father. The previous book, Gathering Blue,  follows Kira. Matty was friends with Kira when he was a young boy. He lived in the village that she had grown up in. He wanted to find the plant to make blue dye for her weaving and stumbled upon the village. Everyone in the village is nice to each other and they all help each other. *SPOILER ALERT* The person who is Leader of this village is Jonas from the first book. You wouldn’t catch that if you didn’t read the books one right after another, though. *SPOILER OVER* The blind man that Matty lives with wants his daughter to be with him, so Matty goes into Forest to travel and get his daughter, Kira, for him. This was a really short book, but it was really good. I love Lois Lowry’s writing style, and I love this series. It’s so well planned out and it’s such a beautiful idea. I cannot wait until I’ve read the last book in this series.

Matty is honestly the sweetest character ever. He loves his little puppy and he loves what he does with delivering messages and he loves his gift. I didn’t really like Kira in this book, but she wasn’t in that much of it, so it’s alright. She was kind of whiny. I mean the reasons behind the whininess makes sense, but it was still irritating. Overall my favorite character was Leader. I love him. He’s such a lovable and helpful character. I love that he helps at the end and that he can see beyond. He also has a huge library… and that’s a lot of books… and books are really cool, so yes. I’d choose him. 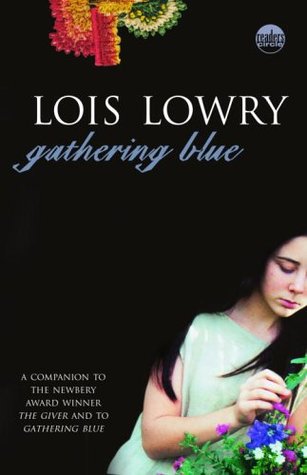 In her strongest work to date, Lois Lowry once again creates a mysterious but plausible future world. It is a society ruled by savagery and deceit that shuns and discards the weak. Left orphaned and physically flawed, young Kira faces a frightening, uncertain future. Blessed with an almost magical talent that keeps her alive, she struggles with ever broadening responsibilities in her quest for truth, discovering things that will change her life forever.

As she did in The Giver, Lowry challenges readers to imagine what our world could become, and what will be considered valuable. Every reader will be taken by Kira’s plight and will long ponder her haunting world and the hope for the future.

In a village there is a hierarchy. Our main character, Kira, is in one of the lowest branches. Kira lives with her mother, and her father is suspected to be killed by the Beasts that live in the Field. Kira is born with a twisted and crippled leg and was supposed to be sent out to the field as an infant, but her mother pleaded and begged to keep her at home. Her mother won that tiny battle, and Kira was kept at home. As infants the villagers are named a one syllable name, and as they age they add more syllables to their name. The oldest person in this book has a four syllable name. That four syllable name is the person that Kira visits to learn to dye thread and yarn. There is something special about Kira. She can embroider and weave. She is put in charge of fixing the Robe. The Robe is the story of their people. The Singer wears this special robe at the Gathering while he sings the history. Kira learns to make the colored threads, but doesn’t know how to make blue. Blue is the color she most desired to make, so her friend goes and finds the plant to create blue. Based on the reviews on Goodreads I was really skeptical. NO ONE LIKED THIS BOOK. I enjoyed this book. Everyone was freaking out that it wasn’t the world as The Giver, but it was. It wasn’t the advanced utopian world, but it was the dystopian side of it. If everything was as advanced as The Giver then it would be a completely different world. I loved that it showed the other side of the world.

Kira had two friends. Matt who was in the lowest branch of the hierarchy, and Thomas, The Carver. Thomas carved wood like Kira embroidered. Kira and Thomas were lovable characters. Matt was so cute. It was unclear to how old he was, but he was adorable. He had a pet dog that he nurtured back to health, and he grew up in the Fen. Because he lived in the Fen he had a weird accent. He was probably my favorite character.

Todays challenge for the BookTubeAThon 2014 video/blogging challenge was draw a new cover. I honestly accidentally did this. I was at work and it was really slow because it wasn’t a beautiful day, and I was at the front desk and I just started drawing. I LOVED The Giver so so so so so much. But the reason I didn’t read it before was BECAUSE OF THE COVER. It’s a creepy old guy. That’s it. *see here*

Oh my gosh. I didn’t even think of him like this. The Giver was supposed to be a cool old guy who could see color! Not creepy. Anyway, I drew what I thought would be a pretty cool cover.

Jonas’ world is perfect. Everything is under control. There is no war or fear or pain. There are no choices. Every person is assigned a role in the Community. When Jonas turns twelve, he is singled out to receive special training from The Giver. The Giver alone holds the memories of the true pain and pleasure of life. Now, it is time for Jonas to receive the truth. There is no turning back.

Jonas is eleven and lives in a futuristic world. He lives in a place where when you’re born you are grouped with everyone born in that year and they become the people in your grade. At the age of One they are put with a family. Each year in December they have a ceremony. In this ceremony the whole grade/group of kids gets something new or gets a small thing changed. For one of the years they get their first bike, for another they get a button down shirt with buttons in the front instead of the back, but for the twelfth year they get told their occupation. After they get told what they will do for the rest of their lives, whether it be a laborer or someone who takes care of the Old, they begin training for their job. Every day after school they head to their job training. While everyone else is planning their future, Jonas is receiving memories from his instructor, The Giver. Jonas is the new Receiver. He takes some of the burden of the memories that have been passed down from all the Givers. He is gifted some of the good memories and is put through the pain of the bad memories in preparation to be the newest Giver. I loved this book. It was so beautifully written and wonderfully told. I wasn’t sure how I was going to feel about this book, but I was hooked by chapter two. I think that this should be a book that is read by everyone. Read in schools for required reading. Read to children by parents. Read by everybody. It was amazing and cannot wait to read the other three in the quartet.

Jonas was an awesome main character to follow and read about. I never got bored or irritated with anything he did at all. He was always so brave and courageous. The Giver was my favorite character, though. He was so wise and so smart because of all the memories he had. He got to read all the books to get more information. The books weren’t allowed in society because knowledge was kind of like a weapon. He knew all the stories. He knew everything.

I would choose to be The Giver. He knew more than anyone and everyone combined in the quarantined utopia. He was so smart and so extremely wise, but he was also burdened with all the horrible memories. Sure he had nice and fun memories, but not enough to outweigh the bad. Because of Jonas he had an easier time with dealing with the harsh memories, but that would be so much to handle.