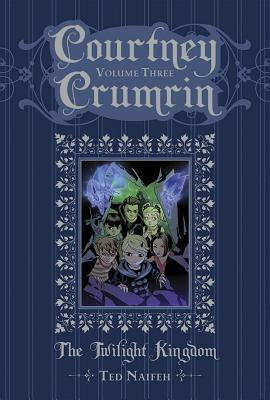 Courtney Crumrin returns in a series of newly remastered, full-color hardcover editions! To her new classmates, Courtney is merely the grim, quiet girl in the back row. But when a group of students accidentally turns a young boy into a goblin, Courtney must lead the children into Goblin Town to find a cure. Unfortunately, misfortune seems to follow the group straight to the Twilight Kingdom – misfortune and a misguided lawkeeper who has it out for Courtney!

Courtney gets some new friends from her school filled with witches and magic and takes a trip to Goblin Town to try and change a classmate back into a human. The newly-founded friend group has to venture far into the forest in order to save the boy who has gotten turned into a goblin. They eventually find themselves in Twilight Kingdom where they end up in trouble with the law and have to fight there way back to their town.

This one was just as good as the first one! There was action and an actual plot. Yay for plot-driven stories.

I am really starting to enjoy Courtney more as a character. She’s spunky and sassy and a little mean, but I think she’s a solid character to have a series about. I’m so excited that she finally has a group of friends because now I don’t think she’s going to be so sad. She’s been so sad and lonely, so it’s nice to see her be a little happier.

My favorite part of this book was right at the end when her uncle offered for her to travel with him this summer. Aww cute.

I didn’t like her friend Malcom from the beginning, I don’t really think he had anything important to do with the storyline so idk why he was even there. I’m sure that he’ll come up somehow in the rest of the series, but he just seemed like a very stagnant character.

I really appreciate the art style because it’s so unique and the color scheme is so pretty. I love when the colors are more neutral but still fall into the darker side of cool colors. Theres a lot of green, purple, and blue so it feels very… cold and mysterious maybe? I’m not really sure but I think it complements the storyline nicely.

I’m sad because my library only has the first four volumes of this series so I don’t know how I’m going to read 5, 6, and 7 :( #tragic. I’ll have to find them somewhere because I think I’m really going to want to finish this series!