Up to This Pointe – Jennifer Longo 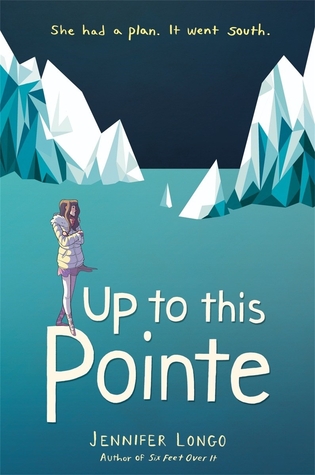 Title: Up to This Pointe

Harper Scott is a dancer. She and her best friend, Kate, have one goal: becoming professional ballerinas. But while Kate is a naturally gifted dancer, Harper has had to fight for every step. And now it’s make-it-or-break-it time: if their auditions go wrong, their dreams are over. Harper won’t let anything—or anyone—get in her way, not even the boy she and Kate are both drawn to.

Harper may not be a natural, but she is a Scott. She’s related to Robert Falcon Scott, the daring explorer who died racing to the South Pole. So when Harper’s life takes an unexpected turn, she finagles (read: lies) her way to the icy dark of McMurdo Station…in Antarctica.

Extreme, but also somehow fitting—apparently she has always been in the dark, dancing on ice this whole time. And no one warned her. Not her family, not her best friend, not even the boy who has somehow found a way into her heart.

This book was good, but I wasn’t blown away.

For some reason I decided to not finish the last 50 pages of this book before leaving for my 17 day England travels, so when I came back and finished it, it felt a little disjointed. That was all on me, though, because I just chose not to prioritize it…

Up to This Pointe follows a girl named Harper Scott who wants to be a professional ballet dancer. Her dream has always been to be in a ballet company, but something happens and her dreams are momentarily put on pause. She decides she needs to get some distance from San Francisco and finesses her way into going to Antarctica for researching for 6 months.

She jumps on a plane and heads out to the frozen tundra where she is finally able to be seen as herself and not just “the dancer.” She meets people and makes new friends who help her see she has other interests instead of just dancing.

I related to the whole “oh my gosh my life isn’t what I thought it would be right now and I have no idea what I want to do with my life” more than you will ever know lol. I have been having all these same feelings for a couple months, so I related so much to this! I also don’t know if I want to go into the professional dance world even though I’ve been dancing for almost 15 years of my life. Life is weird, guys.

I didn’t love the relationships or the ways they were portrayed throughout this book. Harper meets this super cute and sweet guy in San Francisco who really likes her, then she just leaves and goes to Antarctica. Fine. No worries, I guess, but then she meets another guy while she’s there. I don’t think she really likes him I just think that she’s “dating” him because it’s convenient and she wants attention. But then other times I think she actually does like him. I don’t know. But the original super sweet awesome cute boy from San Fran is sending her emails and letters and she just doesn’t read them.

What the heck. Why wouldn’t you read them and respond? She likes him. A lot. Or so she said before she left, so idk why she wouldn’t look at them. Plot device? I don’t know.

He also just keeps sending them even though she isn’t responding. I admire that his character has resilience, but that is totally not what would have happened. He would have emailed for maybe a month and then got the message that she wasn’t interested. Because that’s what she was portraying to him. Just seems a little fishy to me.

There was also LITERALLY NO WAY she would have gotten the opportunity to go to Antarctica.

Not realistic at all. People would be waiting to go and working for years and years to get a spot on the list. There literally no possible way that could have happened… but this is also just a book, so I’ll give it a little grace.

I know there was a lot of negative in this review, but I actually did enjoy a lot of this book. I love books about dance, even though it’s not always done in a way that makes a ton of sense.

The reality of dance is this: it’s a lot of hard work for not a super great reward all the time. You work for hours a day and might not get a part because you’re too tall or won’t fit into a costume. Dance is so subjective and that makes it so difficult. You could have amazing technique, but your body doesn’t fit the type they want. Again, a lot of work for not always a great reward.

I loved the family dynamic because everyone was so close; it reminded me a lot of my own. I’m so close with everyone in my family, so it’s nice to see a strong family unit that doesn’t have any disruptions in it.

Overall I enjoyed this book and would recommend it to anyone that dances because there are some little tidbits of info that only a dancer would understand :)