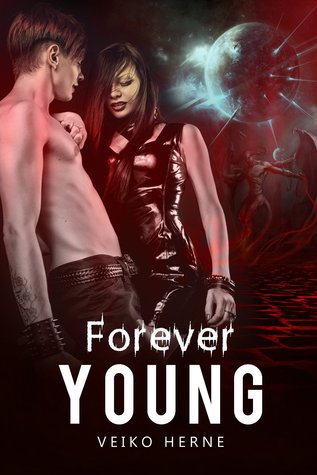 “Well-developed characters fill every page of Forever Young. Travel with them through twists and turns of an exciting and intriguing plot.”

“Evangelist Jeremy brings his children of faith, the punk Rudolf and the goth Gerthu, together. He becomes an alcoholic, after discovering they are vampires belonging to Satan.
Gerthu’s best friend, Jean D’Arc’s half sister, Catherine, lives in Gerthu’s mirror. A witch put her there for protection. The church burned the witch, trapping Catherine inside the mirror.
After drinking Sangria (Sang Real), given to Rudolf by an old Gipsy woman, Rudolph and Gerthu become immortal vampires. They travel Europe in search of the Franks King Theudebert, the Visigoth Witch and for the greatest Vampire Vlad. They sleep for one hundred years, waking to find Europe in the grip of an ice age.
Dispatched to the planet Paradise they meet Satan, the Holy Spirit, Jesus and God.”

Gerthu has a friend living inside her mirror in her house. She came across this friend when her mother bought the antique mirror for her, and placed it in her room. Gerthu is very Goth and always wears either black or dark red lipstick and nail polish everyday. One day Gerthu goes out and sees a boy at a gathering named Rudolf. The two, of course, have a romantic relationship. They drink a sketchy bottle of wine obtained from a gypsy-witch on the street; they decide to drink it, and then become vampires. The couple goes on adventures and use their vampiric abilities for various things.

I was sent this book by the author in exchange for an honest review. This was an interesting book to read; I did not enjoy it, but it was very short. The plot was all over the place, and nothing really correlated with anything. They just did random stuff in order to further the plot. I had some problems with this book because of these random events. There was no reason for a lot of the events to ensue, and I didn’t really feel anything when I read it.  Gerthu just randomly had a friend living in her mirror, then had some religious people come to her door and invite her to go to a meeting, then met a guy and “fell in love.” Okay. More on this in the next section.

I honestly don’t understand the point of this book; I know it may seem harsh, but I don’t get it. The two decide to drink some wine from a sketchy lady on the street. Can you not see this is a bad idea?! It wouldn’t have been so random if they would have had reason to drink it. Overall, I think that this could be a good book if it were continued on a little more. If I were writing it, I would just explain more about the plot and story line.

This was the most insta-lovey book I think I’ve ever read. I get that it was very short and that if there was going to be romance that it would have to be developed quickly, but they literally met and “were in love.” The problem with any case of insta-love is that you don’t really fall in love at first sight. There is literally no way to. You have to actually know a person in order to be in love with them. Within one page, Gerthu and Rudolf had “fallen in love,” and that was my major problem. It would help the story if their meeting was a little more drawn out and the story correlated with it more.

I would choose to be Gerthu, I suppose. It would be interesting to know what it would feel like to become a vampire. I didn’t particularly like Gerthu, but she was a decent character. It’s hard to relate to someone that is so different from you!

Huge thank you to Veiko for allowing me to read this book! I always enjoy when authors contact me :) My advice would be to elaborate some more on some of the points in the book/novella, because the concept is there! Best of luck to you!