What We’ll Do For Blood (The Almost Human Series #1) – C.L. Mannarino 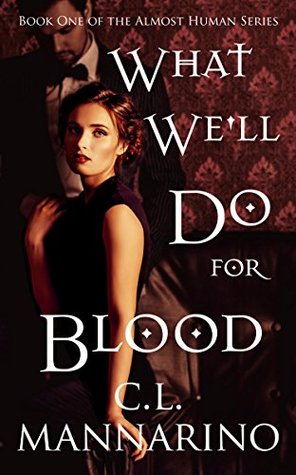 Title: What We’ll Do For Blood (The Almost Human Series #1)

In the sleepy town of Northam, Massachusetts, not everyone is who they seem to be.

Take Scott Whitney, for example. A struggling high school senior, Scott wants nothing more than to have his much-divided, social-climbing family believe him when he comes to them with something important, no matter how often he disregards their rules.

One night, Scott catches his father’s beautiful colleague, Maria, drinking his father’s blood in their office parking lot. When his father has no recollection of this event, and gets weaker the more he spends time with Maria, Scott turns to his mother and sister for help. When he realizes that Maria has captured their hearts and minds, as well, Scott has to find a way to believe in himself, and become more than anyone thought he was capable of, in order to stop her.

But what will it cost him?

What We’ll Do for Blood is the first book in a series of young adult supernatural novels. If you like heart-racing action, highly-driven characters, and strong family ties, then you’ll love C.L. Mannarino’s visceral vision of a world where the supernatural is very much alive.

Huge thank you to C.L. Mannarino for sending me a copy of her book! I love getting to meet new people through having a blog!

Scott is part of a fairly average family living in Northam, Massachusetts. Scott is an average boy; he goes to school, he has a girlfriend, he gets bullied a little bit. Everything in his life changes when he goes to a meal with his father and his coworkers and he sees Maria for the first time. He doesn’t understand why, but he can’t stop staring at Maria, and he can’t stop thinking about her. He feels that there is something a little off about her, but he ignores it for awhile.

Maria and her boyfriend start coming over to Scott’s house to have dinner and hang out with his parents. His parents start acting very strange whenever Maria is around, and then they start acting like different people. Scott’s father ends up spending a lot of time with Maria at work and playing cards at her house, and Scott is very skeptical about their relationship. One night, Scott delivers food to his father and see’s something unthinkable happening. He knows his life has changed forever…

I read this book fairly quickly *as in three days* because it was a very addictive story, and you wanted to know what was going to happen next. I, however, do not enjoy vampire stories very much. I’m perfectly fine with a vampire being in a story and not having the main theme, but I just don’t like reading stories only dealing with vampires. So, I’m assuming from the synopsis and the beginning of this review you’ve realized that Maria is the vampire. She’s a very very typical vampire; gorgeous and mysterious. I don’t love super mysterious characters because it feels like you don’t really get to know them that much, so I didn’t really like her. I understand you weren’t supposed to like her because she’s the “bad guy,” but she just seemed fairly blah.

Scott was a good character to have as a protagonist. He was different than most teenage boys; he was a little overweight but he had a girlfriend, he got bullied a little bit by a certain boy in his class. He wasn’t a typical strong character, so it was nice to read from his perspective.

I don’t know how I feel about the ending. I think the way you become a vampire is super self explanatory, so idk what was going through everyone’s minds near the end, but whatever. It’s not how I would have ended the book, but it leaves room for the next story to begin.

Again, thank you to C.L. Mannarino for sending me a copy of her book!