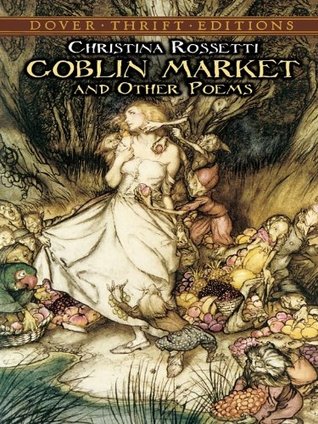 Title: Goblin Market and Other Poems

This wasn’t what I was expecting. The title poem suggests mischief and magical creatures, and yes the goblins were that but I thought there would be more.

I think the first poem was the only one with a fantasy element which was very disappointing to me. I LOVE fantasy obviously if you’ve seen a lot of the books I read, so when you go in expecting that and get only tragic poems about death and despair it throws you for a loop a little bit.

That being said, the poems were beautiful. I will say that. There’s a reason Christina Rossetti is known for “Goblin Market” because the poem was beautifully written. But I found myself getting lost in the poems! Let me explain a little more.

These are short poems; most of them were only a few stanzas, but the wording was almost too flowery for me to understand. I think this is a time period situation because a lot of the other literature I’ve read from around this time is very similar in the sense that the descriptions are very in depth and the word choice is a little over my head at times. I kept getting lost in the little poems! I would try and focus and pay attention to them, but I think most of the deeper meanings went over my head. This could also be because I read it late at night, but that’s on me.

I think there are worse things to have to read for a class, so I’m happy with this as a required reading. I wouldn’t necessarily recommend this to anyone not interested in literature and poetry because it is hard to understand sometimes.